Home » »Unlabelled » The Yarn Duck and Other Local News

The Yarn Duck and Other Local News

I had to roll out of bed and drive to the grocery store first thing this morning, because my son (teenagers!) neglected to tell me that he'd used the last of the dog food last night. Then I had a blueberry protein shake for breakfast, caught up on some chores, and settled down to watch football. I kept flipping between the Three Stooges and the Green Bay Packers, and I started to doze off. In my sleepy, stupified state, my mind started conflating the two programs, and confused images started popping into my head, like Larry jumping offsides (dressed in a suit of armor) and Brett Favre tip-toeing up behind an opposing player with a big piece of lumber, trying to conk him out.

I don't know what it's like in your neck of the woods, but in mine, we've apparently made a group decision to ignore the traditional sanction against Christmas advertisements before Thanksgiving. I wasn't consulted. But everything's Christmas already—the stories on the news, especially. The piles of crap atop the aisle dividers in the local drugstore are so high they block out the light from the fluorescents and make the aisles seem dark. It's like we just have to forget all about the thankful holiday and get right to the greedy one. I have a new defensive proposition: no Christmas stuff until after Halloween. That one still seems to be in force. I wonder how long it will last?

For the record, I can't imagine wanting any material thing enough to stampede my way into a store climbing over, shoving, and elbowing fellow shoppers as I went. I suppose I'd do it for food if my son were starving, but the thought of doing it for a Play Station 3 is completely alien to me. Then again, I somehow live without cable, a gaming system, or a cellphone, so I guess I'm not exactly the ideal consumer of electronics. Rioters are preferable.

Meanwhile, back online: The Online Photographer turns one soon. A week from tomorrow, to be exact. As part of the gala celebration, all contributors will be flown to Paris for lunch at Maxim's, where the champagne will flow like water, and everyone will be given gold-plated limited-edition Linhofs and showered with praise. Well, not really. However, to mark our birthday, next Monday we are publishing T.O.P.'s list of the The Ten Best Living Photographers. Please tell all your friends, and please check in on Monday so you can help disagree with our list. 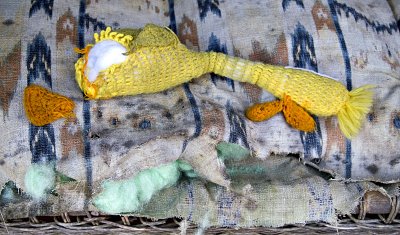 The defunct yarn duck, after a months-long second career. The pale green dacron seen at lower left is in local demand.

In other developments, the Yarn Duck is giving up the ghost. I have a sneaking affection for the Yarn Duck—clearly knitted as a cuddle-toy for little kiddies, it has survived an astounding second career as a favorite tug-of-war and fetch-it toy for my pit bull. Lulu, the dog, is as strong as a chimp (chimps, as you may or may not know, are five times as strong as NFL linemen, although I guess if I have to explain my simile it means it's not a very good one), and the Yarn Duck has absorbed incredible abuse. Alas, the Yarn Duck has a mortal wound in her side now, and is losing her stuffing. Lulu is very fond of the Yarn Duck too—when we put it away where she can't reach it, Lulu carries one orange yarn foot around in her mouth (I put it in the picture, there on the left) like Linus with his blanket.

Finally—speaking of stuffing—a local mystery was solved the other day. Something's been eating away at the cushion of an old wicker divan we have on our back deck. This has had me mystified, since I'm pretty sure the stuffing is dacron, inedible even for desperately hungry critters. The mystery was solved when I witnessed a large squirrel scurrying haltingly across the deck with a giant poof of pale green dacron in its mouth. It stopped, groomed the poof of fuzz into a neat pellet, and proceeded on. Somewhere, close by, there are some unusually well-insulated squirrel nests, in a happenin' shade of green.