. The book is divided into six chapters as follows: 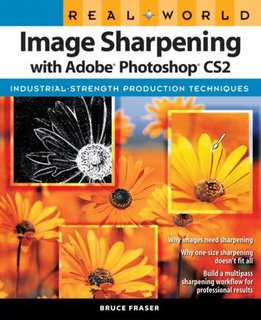 A short introductory chapter explains how sharpening works by emphasizing edge contrast. In Chapter Two Fraser considers the difference between sharpening film and digital images, and balancing noise reduction needs with sharpening. Next we move into a superb explanation of varying your sharpening technique based on image content. Bruce talks about how a low frequency image like a portrait, which has large continuous areas of tone and gradual transitions, may need a different sharpening technique than a high frequency image like a city skyline shot with lots of tight transitions in a small area.

The theoretical foundations in the first three chapters build an excellent case for a two-step sharpening workflow, which considers the image source and content first, and then output usage. While sharpening your images twice may seem almost heretical at first, after reading the book I felt that my previous workflow of globally sharpening the image for output was rather primitive.

Chapter Four goes over how the sharpening tools in Photoshop work, including a detailed look at Smart Sharpen settings. That's all fine and dandy you say, but show me the money—how does Bruce do it? The various sharpening techniques are based on using Calculations to create a new channel, Find Edges to create a mask, adding an appropriate amount of blur to the mask based on image content, and then sharpening the edges through a mask. There are some great settings for limiting your sharpening to the midtone tonal range using the Layer Blend sliders. The steps are explained quite well, and if you follow along at the computer you'll easily be able to create a Photoshop Action.

Many of you are probably using third party tools for noise reduction such as Noise Ninja or Neat Image. Bruce includes a discussion of the Photoshop Reduce Noise tool, and some very simple and quite useful techniques for reducing luminance noise by using the Despeckle command on individual channels.

In Chapter Five the techniques are put together into a workflow. Whether you are a Photoshop novice or an experienced veteran, you're going to learn something useful here. Unsharp Mask radius setting voodoo is divulged. Low, medium, and high frequency images are analyzed in detail. Selective sharpening and smoothing are covered. Chapter six shows additional sharpening case studies on a 4x5 chrome, 35mm color negative, hard-copy scan, and both JPEG and RAW captures from a digital SLR.

Posted by JOE REIFER
Actually I not only found more control doing it myself but found it so simple—pretty much a 3–4 step process—that I wondered why people would spend that kind of money for PG when they could do it themselves if they took only an hour or so of reading articles and then practicing (which never made anyone worse). Going the automated route might be considered easier, and things can seem to get complicated learning it yourself, but because images, their characteristics, and the output desired can vary so much, a photographer wanting the utmost in perfection would at least want to understand the fundamentals better so as to tweak them for their needs and understand why they are doing so, and what it is actually affecting.

I hope I'm not sounding haughty but I think taking easy shortcuts (and spending the money), on such things as Pixel Genius and saying that it's "good enough" can short-circuit your potential, much in the way relying too much on auto-exposure can affect your images. Or similarly in having someone else develop your B&W negs.

There seems to be packaged actions sold for almost every aspect on post-exposure image production these days and there may be danger that soon you yourself will not only have little control in the end but will not even really know how you got where you ended up.

Call me old fashioned, but adding constantly to my knowledge and expanding my depth and understanding of what goes into producing my images is what I need to build up the wisdom I desire to master my craft.

These books, and the different aspects they cover, are the what the zone system, developer process and darkroom process were in the pre-digital age. You can dive in as deep as you want or just wade into the shallows up to your knees. But as in the past, it seems the waders are generally the ones who seem most frustrated in why their work never seems to go over the top or be all they want it to be.

Joe's review sounds great. And if the book is half as good as the other Real Word books Fraser has been involved with were, I'm excited to pick it up and read it.
3:06 PM
Unknown