David Segal, a writer for the Style section of The Washington Post, recently posted an article/slide show on Slate that was linked here on T.O.P. asking whether photographers can be plagiarists. Legally, the answer is no.

According to the Merriam-Webster Online Dictionary, to "plagiarize" means:

“to steal and pass off (the ideas or words of another) as one's own use (another's production) without crediting the source;” or

“to commit literary theft: present as new and original an idea or product derived from an existing source.”

While plagiarizing may lead to a failing grade or a form of humiliation, the legal recourse available to creatives for the theft of their work is found in copyright law.

Some may be surprised to find that the purpose of copyright law is not to protect the work of creatives, but, as stated in Article I, section 8, clause 8, of the United States Constitution, "to promote the Progress of Science and useful Arts, by securing for limited times to Authors and Inventors the exclusive Right to their respective Writings and Discoveries." Copyright law attempts to achieve a balance between public interest and the rights of authors/artists so that artists will be encouraged to create and the public will be the ultimate beneficiary. In many ways, the priority leans towards public concerns when there is any conflict in those interests. As a result, the law may not seem fair or just to the copyright owner.

A copyright is created at the moment a work is made into a fixed form. For photographers, it is created at the click of the shutter. A photograph is protected by copyright regardless of whether it is recorded digitally or on film. Images on the web are protected by copyrights, just as prints are. Copyright law pro tects both unpublished photos and published photos, regardless of whether they have been registered with the U.S. Copyright Office.

Copyrights give the owner the exclusive right to do, or to authorize others to do, specific things with the photographs. When you own a copyright, you have the sole right to:

A copyright holder also has the right to control derivative works. A derivative work is one that is based on one (or more) earlier works (either your own or someone else’s works). It includes editorial revisions, annotations, or other types of modifications. The work must be different enough from the original to be regarded as a new work—it must contain some substantial, not merely trivial, originality. Therefore, if you make a derivative work based on someone else’s work, under copyright law you need permission from the copyright owner, in most cases, or you have infringed the copyright. 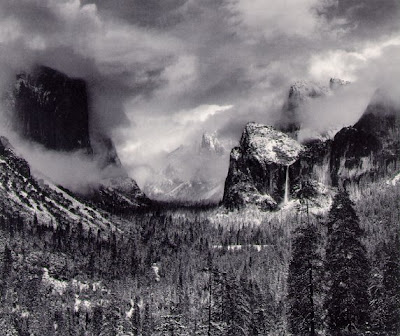 Ansel Adams, Clearing Winter Storm, Yosemite National Park (taken from "Tunnel View")
For example, if you were in beautiful Yosemite National Park on your way to the Mariposa Groves, you might pull into a parking lot next to a tunnel. You look to your right and see the splendor of Yosemite Valley including Bridal Veil Falls, Half Dome, and El Capitan. You want to photograph the scene. If you look down closely, you’ll see the thousands of tripod leg indentations. It’s been done before, and done well by none other than Ansel Adams. So when you make an image similar to his "Clearing Winter Storm," have you infringed his copyright?

Copyright law protects original expressions, not ideas. So when Mr. Adams had the idea to photograph from Tunnel View, he owned the copyright to the expression of that idea only. That is, his copyright covers the photograph, not the subject matter. So then it’s perfectly OK to photograph the scene at Tunnel View, right? Well, there’s more.

Copyright law also protects his expression of the subject including the elements of his composition, the lighting, the shading, the camera angle, the background, and the perspective. The parking lot at Tunnel View is small and allows few options to photographers. If you create an image of the same scene and include some of the same elements of Mr. Adams’ composition, does that constitute infringement? It would only if you produced something "substantially similar" to his work and had access to the original work (which, in this example is fairly easy to show).

If you place a copy of Adams's "Clearing Winter Storm" photograph next to your camera and do everything that you can to create precisely the same image, even stating that you are attempting to make an exact copy of his photograph, are you guilty of copyright infringement? It depends on whether an ordinary person would find that you were successful in copying his image to a meaningful degree; but probably not. The trees in the area are different now, the weather and the quality of the light change every moment, and Mr. Adams had skills that most do not have. 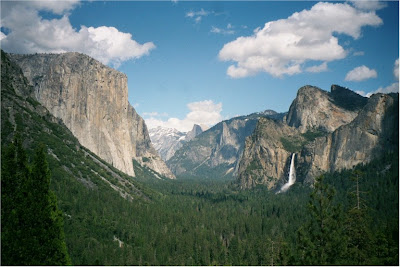 Tunnel View by Claude A. Muncey
This is not fair test of direct copying or derivative works because photographs of objects as they occur in nature are not protected by copyright law since they are ever-changing. But studio and other controlled shots have been found to infringe others’ copyrighted works. Unfortunately, it’s a judgment call by a court as to whether a photograph infringes on another work as an unauthorized copy of derivative work. Other considerations such as fair use, transformative use, and public domain enter into the equation as part of the legal system’s effort to promote the development of art.

All photographers are inspired by other artists, including photographers. That is how art develops. But when a photograph is so similar to another work that it appears to be the same expression of the idea, it may be difficult to believe that it was an accident. Imitation may be the sincerest form of flattery, but no one is grateful when work is stolen. However, courts don’t always find infringements in those cases despite there appearing to be obvious copying to the outsider’s eye. For instance, artist Jeff Koons was found to have infringed the German shepherd puppies’ picture in Rogers v. Koons but not when Andrea Blanch sued him for a similar appropriation.

Carolyn E. Wright, an attorney specializing in the law for photographers, blogs at photoattorney.com. Her book Photographer's Legal Guide is available in softcover or as a downloadable e-book.
4:38 AM
Unknown