It's March 5th, and, as promised, Olympus has revealed two new digital SLRs. The first is an upgrade of the Europe-only E-400 called the E-410, and the other is an all-new 16-oz. compact DSLR called the E-510 (all the pictures in this post are of the latter). Both have live-view LCDs and the E-510 has in-the-body anti-shake image stabilization. 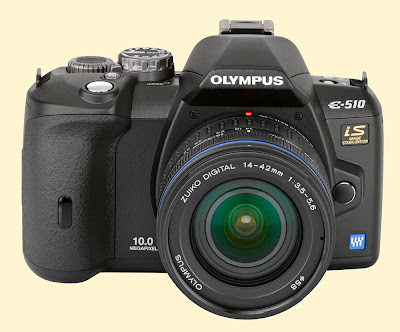 The big news is that neither have Kodak CCDs; both have 10-MP Matsushita LiveMOS sensors. This is apparently the same MN39960 LiveMOS image sensor imager jointly developed by Olympus and Panasonic for the Lumix DMC-L1 and the Olmpus E-330 (or something closely related). The sensors offer live preview on the cameras' LCD screens and low power consumption. So far, this sensor has not been notable for good high-ISO performance, but both new cameras sport a brand new processing engine called "TruePic III," so we should reserve judgement on that until actual test reports start showing up. 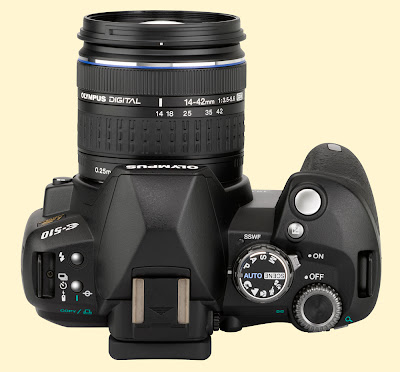 On the down side, neither camera has an articulated LCD screen, which will limit the usefulness of the live preview somewhat; I would have liked to see 90-degree articulation for waist-level viewing at least on the larger camera. On the good side, both will apparently be available in North America, and the E-510 (which looks "the business," as the British say) is about the perfect size, shape, and weight for a carry-around, note-taking-type camera—quite close to the "digital OM-4T" that some of our readers were asking for just the other day. 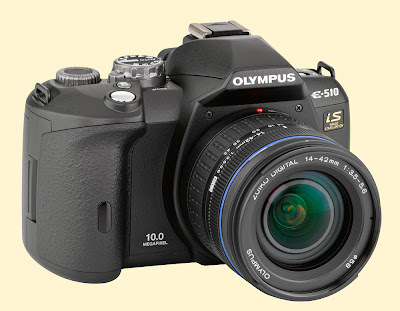 (Click on any of these pictures to see larger versions.)

Posted by: MIKE JOHNSTON
11:07 AM
Unknown