Try It: The Northlight Portrait 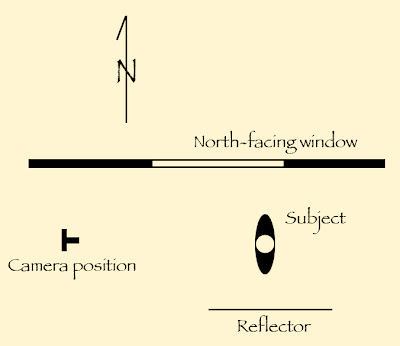 Here's a simple assignment that's a good example of one thing digital often does better than film: the classic north-facing window-light portrait. North light—long favored by painters—can be particularly beautiful in many types of weather, but it's often not very bright on the indoor side of a typical window. A film of ISO 200 or less often made for a somewhat uncomfortable balance between slow shutter speeds, motion blur, and apertures that were a bit too wide. But with a DSLR, ISO 800 or 1600 (particularly if you also have IS of some sort) can be very liberating, allowing you more latitude for experimenting to find the right aperture while still keeping the camera off a tripod and not risking subject motion blur.

A few hints: try it with and without the window in the frame. If you're going tight on the head or head-and-shoulders, use a lens with a 35mm equivalent of 100mm or more—as much as 200mm if you're going in tight on just the face. Experiment with the reflector, which can be anything from a large sheet of cardboard or Fome-core (often available in the school- and stationary- supply aisle of your local drugstore) or a white bedsheet held up by a helpful assistant—anything large and white (or just light-colored, if you're converting to B&W) will do. You can experiment with reflector angle, size, or distance from the subject; the closer the reflector is, obviously, the more it will fill. Less light in the background often looks nice (bright objects in the background may be distracting), although there's often no need to be fanatical about making the background completely black. The subject can be looking at the camera or not, or out the window.

This is the very light that many studio portrait lighting setups are attempting to emulate. Having a few nice window-light portraits under your belt can "calibrate your eye" to what you're looking for in the studio as well. 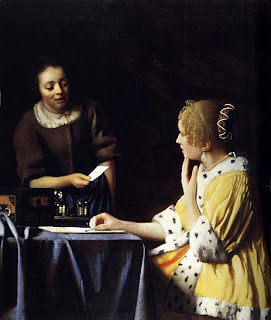 Jan Vermeer, Mistress and Maid, c. 1666–7.
Many of Vermeer's scenes have the look of north light.
Try it. If you like what you've done, leave a link to your picture in the comments—I'd like to see, and I'm sure others would, too.

Posted by: MIKE JOHNSTON
10:48 AM
Unknown