When Less Really Is More
Recently I've been experimenting with a Pentax 70mm ƒ/2.4 DA lens

, the longest of the Pentax compact "pancake trio" of lenses. Since its angle of view is equivalent to a 105mm on 35mm format, I was reminded that the first high quality accessory lens I ever bought, back in 1965, was a 105mm ƒ/2.8 Super Takumar for my Pentax H3 camera. Along with excellent optical quality, one feature of that lens was that it was significantly more compact than equivalent lenses from other manufacturers. But look at this comparison between the venerable 105 and its new descendent: 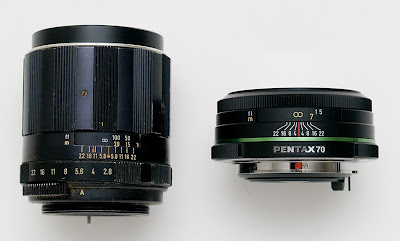 Here it is mounted on a K10D camera: 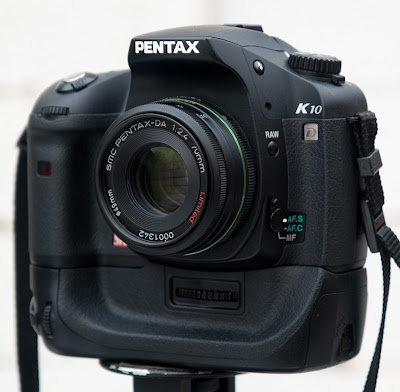 That is amazingly compact for a telephoto lens! I'm also impressed with the picture quality. I don't use longer-than-normal lenses very much—shorter lenses suit me better in almost all situations—but here's something from yesterday that I like: 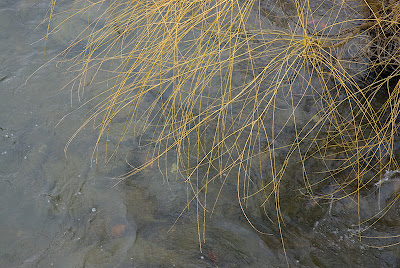 The optical quality leaves nothing to be desired. If the designers have compromised anything to achieve the compact size, it isn't apparent in pictures I've made with the lens. Well, one compromise is obvious—the lens is quite pricey.

So who might be interested in spending the money to have such a miniaturized lens? My first thought would be, someone for whom a moderately long lens feels "normal" (the way a moderately short lens feels normal to me). The camera/lens package, especially if you leave the grip at home, would make a great little "walkabout" kit if this angle of view fits your vision.

Then I realized that someone like me is another obvious candidate, for one specific reason. Since I seldom use a long lens, I'm likely not to bother carrying one if it's big, heavy, and bulky. But there's practically no camera bag so small you can't slip the DA70 into it somewhere. This came in handy last Sunday when I happened on an unusual event while out looking for pictures. Pop over to my web log and see the DA70's results in my post for 3/26/07. The second and third pictures were made with the 70, literally because there was no place for me to stand where a shorter lens would have given an interesting view of the action.

Even if I use a long lens for only 2% of my pictures, a lens compact enough to encourage me to carry it at all times means I won't miss out on that 2%.

Posted by: CARL WEESE
Additional Comment from Mike: For those of you who may not be Pentaxians and may not know this, you see that old c. 1965 105mm Super Takumar in the top picture, on the left? You can actually use that lens on the K10D, Pentax's latest and most up-to-date digital SLR, albeit with some inevitable operational restrictions. Now that's back-compatibility for ya.
6:42 AM
Unknown