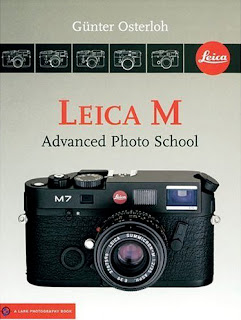 I own many books about Leica, including a number of rare ones, such as the three-volume Lager Limited Editions Leica: An Illustrated History, and various ephemera dating back to the 1930s—but this one's my favorite. It's by Günter Osterloh, who was (still is? Anybody know?) the technical editor of Leica Photography International and Leica World magazines, as well as an instructor at the Leica Academy. It's called Leica M: Advanced Photo School.

I had the first edition of this book, too, until it was "borrowed" by a guy in upstate New York after he bought an M6 from me. Despite numerous requests over a period of years, he refused to return it. I think there is a technical term for this: "theft." Scoundrel!

The first edition is a rare book that is actually rare (not all things known as "rare," such as diamonds or Pentax 40mm pancake lenses, actually are). There are no copies currently listed on Abebooks.com. That's impressive, considering you can find no fewer than twelve 17th-century copies of Sir Walter Ralegh's History of the World on Abebooks, including the 1619 edition.

The Osterloh first edition has a major flaw, however (which might be among the reasons why my thief failed to return my copy). If you so much as looked at it wrong, the pages fell out. Who knows what miraculous modern money-saving technology was used for the binding?

Since then, the Osterloh seems to have gone in and out of print several times. I haven't really been paying attention—but it seems to me it hasn't been continuously available. While the first edition was out of print and the second one had not yet appeared, the prices got astronomical.

This edition also has a flaw: it omits some of the information about previous versions of the lenses. Since people still use Leica lenses going all the way back to the screwmount era, those omissions seem difficult to justify. But at least the binding is good.

And even so, it's a very good book. Anybody from veteran M shooters to digital photogs simply wondering what all the fuss over Leica is about will get a lot out of it. I think it would be worth having even if you don't shoot Leica—and even if you never hope to.

It gets my recommendation, anyway. It's cheap right now too—half the price I think I remember seeing the first edition sell for when it was new, and a fraction of what the first edition would be now, if you could find one. My advice? Nab one whilst you can.