Funny thing about customer support. Customers all tend to assume that they are more competent than most. Some really are, but there's a nice study that shows that truly incompetent people rate their performance unrealistically well. And it's well known that average folk tend to rate themselves just a bit better than that: the Lake Woebegone Effect.

This leads to the plethora of "is it plugged in" customer support calls from irate customers who have done something silly and are convinced that it must be a manufacturing error, because they could never do something that foolish.

. The first job was scanning in all the illustrations from the first edition of the book, to make up a guide for the publisher and the printer showing which illustrations needed to be changed.

With that done I decided to run my usual bevy of tests—dynamic range, uniformity, sharpness. The scanner worked great for quick-and-dirty layout scans, but now I wanted to know what it could really do.

The sharpness was terrible! Even with the scan pitch at a real 1200 ppi, I wasn't seeing much better than 300 ppi worth of resolution in the scans. Not something I would notice doing the low-resolution stuff for the page proofs. But clearly not acceptable in a high-grade scanner. 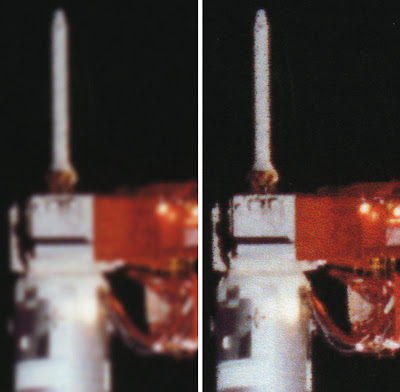 Something's wrong with my scanner?! On the left is a scan
before my scanner was "fixed." On the right, after being "fixed."
I played with it for several hours, to no avail. It was kind of upsetting. I knew Umax was a good company and would stand behind their product; I could even drive the unit to their offices myself (killing an afternoon of time) if I needed to. But it was very frustrating to have a scanner that didn't work well.

Just before I made my call to customer support, I sat down with the scanner again to write down the exact procedures and settings I was using (specific procedural notes are vital to having a non-frustrating tech support session).

That's when I noticed that I had turned on the descreen filter in the scanner software when scanning in the illustrations from the book. I had forgotten to turn it off when I was done.

I was that close to being one of those aggravated (and aggravating) "is it plugged in" customers who is positive they're right when they aren't. But, then, I am above average, right?

Posted by: CTEIN
Featured Comment by Gabriel: Oh, yeah. I hear ya. I recently installed Photoshop on a new computer, only to have it crash every time I resized an image. Only after reinstalling it...twice...that I realized I was resizing in inches instead of pixels. 3000x4000...inches? That'll bring any computer to its knees. Horray for forgetting about the default settings!
6:00 AM
Unknown