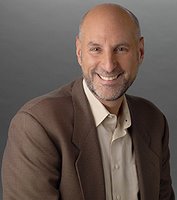 Adobe CEO Bruce Chizen (right) says that Photoshop will be online within six months, c|net News.com reported yesterday. Up till now, Adobe's products have been software programs sold in boxes or by download for installation on end-user's own local computers. The pioneering application for the new paradigm is Adobe Remix, a web-based video editing tool that Adobe offers through PhotoBucket, and Adobe's model appears to be Google, which already offers several online applications (such as Blogger, which you're reading right now). Adobe wants to be ready before anyone else (Google again implied) treads on its territory with online apps for imaging. Chizen told News.com yesterday that a basic version of Photoshop will be made available as an online service. It will be a more basic version than Elements and it will be free to users—Adobe will derive income indirectly, through advertisements.

Chizen said that in the future, Adobe will offer complete hosted applications online, and that it is also looking into hybrid models in which online services will introduce users to its more complete, traditionally packaged software.

Posted by: MIKE JOHNSTON, with thanks to Kevin
6:22 AM
Unknown