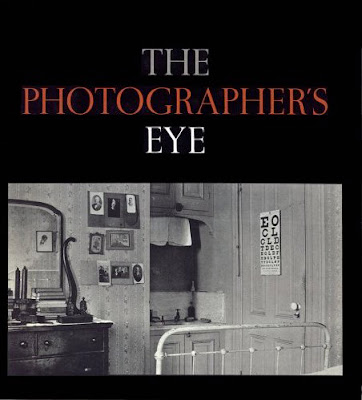 For the first time in many years, very soon now you will again be able to buy The Photographer's Eye

as a new book. John Szarkowski is arguably the best writer on photography of the second half of the 20th Century, at least in English, but he was also one of the most influential curators—especially early on in his career, when this was published. The Photographer's Eye is his visual textbook of how photographs function and why they matter. The plentiful illustrations are an invigorating hodgepodge, ranging all the way from avowed masterpieces to anonymous vernacular photography, and including snapshots, photojournalism, and historical documents; before this book, lumping all those together just wasn't done. Originally published by the Museum of Modern Art in 1966 and now selling used for up to $250, this is a book that was part of the background music for an entire generation of photographers, in one of photography's most fecund periods, the late '60s and the '70s.

It's a slim, slight, modest book with few words, probably Szarkowski's least verbal book. Personally, after a quarter of a century spent studying photography and working with and around photographers of every kind, from rank beginners to the world-famous, I can't think of a single reason why anybody who professes any interest in photography would not want this, or benefit from having it. The new reissue is not out yet—the link is to a pre-order—so I'm not sure if they've recreated the gravure reproductions of the original or not, but that's not really critical. The pictures are the crux of it. This is as close to a must-have and a mandatory buy as any recent reissue, for any photographer. Highest recommendation, and do note that the reissue won't be available forever, as is the nature of such things.

If you buy it through the links here on the site, we get a tiny commission, but that's not the point.

I'm going to be on you about this, so you might as well give in now.

Get it? Get it

Posted by: MIKE JOHNSTON with thanks to Geoff
7:50 AM
Unknown