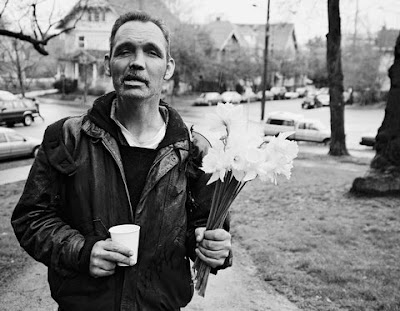 A few days ago, while ambulating through Couch Park, this homeless gentleman asked if I'd like to buy his flowers for a dollar. I politely declined, but asked if he'd be willing to pose with his flowers for the one dollar fee. He happily agreed, and I made this quick snap of him. He was quite pleasant, and was quite happy to receive his "posing" fee.

Posted by: RUSS “KIRON KID” BUTNER
Featured Comment by Del Bomberger: I was going to avoid commenting on the photographing of the "homeless" issue, but, as it continues, it seems I'm going to be drawn in.

As an individual who is the Executive Director of a Homeless Shelter and has performed this job in four separate parts of the U.S. since 1994, I feel it is important to say that there is no way for the average person to know if the person they are photographing is homeless or not.

Your assumptions may well be wrong. They may be mentally ill, they may be addicts, they may simply be lonely and on Social Security and yes, some will actually be homeless, but you can't tell by looking.

I met a woman in a Walgreens in New Orleans last week who is working full-time and graduating from Tulane on the way to Law School. She lives in a homeless shelter, but you wouldn't know by looking at her.

Photographing the homeless is at best like shooting fish in a barrel—it takes little if any extra talent, and brings for the most part little or no new information to the discussion. Many of those living on the street and panhandling are not homeless, just entrepreneurs making a living, working their own hours, without any supervision and not paying any taxes on what in some areas can be considerable income.

View some of them as not much different than someone having a hot dog cart or corner newspaper franchise without the inventory. Of course there are those who panhandle just for the money to keep drunk or high, but they are a minority of the homeless population in my experience.
6:44 AM
Unknown