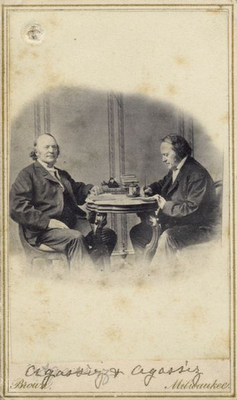 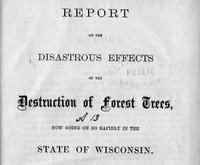 Here in my home state, the Wisconsin Historical Society yesterday unveiled the online digitized archive of Increase Lapham's collection of carte-de-visite portraits of scientists. Lapham was a pioneering leading light of science and civilization in the area. WHS says of him, "He wrote the first book published in Wisconsin; made the first accurate map of the state; investigated Wisconsin's effigy mounds, native trees and grasses, climatic patterns, and geology; and helped found many of the schools, colleges and other cultural institutions, including the Wisconsin Historical Society, that still enrich the state today." (He also wrote our first work of forest conservation, with the characteristically wordy 19th-century title Report On the Disastrous Effects of the Destruction of Forest Trees, Now Going On So Rapidly in the State of Wisconsin, in 1876.) When Lapham would correspond with his fellow scientists around the country—sometimes sending samples and fossils through the mail—they would include cartes of themselves so they would know what each other looked like.

Shown above is a carte-de-visite photomontage double portrait of geologist and zoologist Jean Louis Rudolphe Agassiz (1807-1873), by Milwaukee photographer H. S. Brown. Agassiz founded the Museum of Comparative Zoology in 1860 and was a founding member of the National Academy of Sciences in 1863.

No man is equipped for modern thinking until he has understood the anecdote of Agassiz and the fish:

A post-graduate student equipped with honours and diplomas went to Agassiz to receive the final and finishing touches. The great man offered him a small fish and told him to describe it.

Post-Graduate Student: "That's only a sunfish."

Agassiz: "I know that. Write a description of it."

After a few minutes the students returned with the description of the Ichthus Heliodiplodokus, or whatever term is used to conceal the common sunfish from vulgar knowledge, family of Heliichtherinkus, etc., as found in textbooks of the subject.

Agassiz again told the student to describe the fish.

The student produced a four-page essay. Agassiz then told him to look at the fish. At the end of three weeks the fish was in an advanced state of decomposition, but the student knew something about it.

By this method modern science has arisen, not on the narrow edge of medieval logic suspended in a vacuum.

Posted by: MIKE JOHNSTON, with thanks to Andy Adams
1:31 PM
Unknown