My brother called me yesterday. He couldn't see any reason why his picture appeared, twice, in the post entitled "Do Phototgraphy Websites Need to Grow Up?", so he figured I was testing him, to see if he means it when he claims he reads my blog every day.

Well, I wasn't testing him, but if I had been, he would have passed. A+, Scott.

So I figured I'd do a real post about him. As some of you may know, Dilbert (using the pen name "Scott Adams," but don't be fooled—his real name is Dilbert) writes a daily blog, and recently he posted an item about "Car Singers." 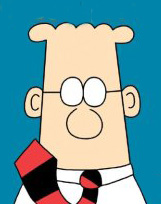 Scott Adams
Here's how to get back at car singers.

Wait until you have them in the passenger's seat on a warm summer day.

Ask them to roll down the window.

Wait until you come to a stop light with another car on your right that has its drivers-side window down.

Abruptly, lean across your friend, and scream, "BLEHHHH! LOOK AT ME!" then quickly turn away and look nonchalantly out your own window.

Invariably, here is what happens:

Your friend in the passenger's seat looks out his window to see who you were yelling at.

The person in the next car looks over at your car to see who was yelling at him—and assumes it was your passenger. Just as your passenger realizes this and starts to try to explain, the light turns green, and you pull away.

At least, that's how it used to work when my brother Scott used to do it to me.

Posted by: MIKE JOHNSTON
8:39 AM
Unknown