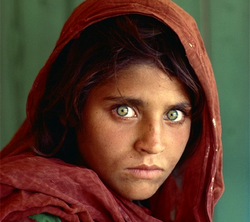 For collectors who might be interested, you can currently purchase a signed inkjet print of the famous Afghan Girl picture from the New York Times Store.

The picture has continued to increase in fame and stature—National Geographic has called it the most recognized picture in the magazine's history—and it has become one of the iconic images of the era. If you can't quite afford the original, I've mentioned before that the best reproduction I've seen (suitable for framing, if you can abide bibliocide) can be found in Looking East

Posted by: MIKE JOHNSTON
8:35 AM
Unknown