First, a clarification about what I’ve been up to here, which is not to do an in-depth product review in the mode of the several online sites, or ink-on-paper magazines, which do that sort of thing well. Nor to recommend any particular products to TOP's readers. The idea here is that some of TOP’s readers might enjoy following the thought process an experienced photographer goes through to choose and then learn to work with a new set of tools. There's no implication that what I chose will be right for anyone else, but rather that the process might help you find the right answer for your needs.

Second, a problem report with the equipment I’ve been talking about. Several readers who also have the Pentax K10D/21mm DA lens combination have written to ask whether I’ve encountered problems with the AF system. Yes, I have. I got in touch with the Pentax folks to tell them about the problems. I sent them JPEG files demonstrating the errors I was seeing with the lens I bought on the open market, and they sent me a fresh-from-the-warehouse second copy of the 21 to test. It worked exactly the same. 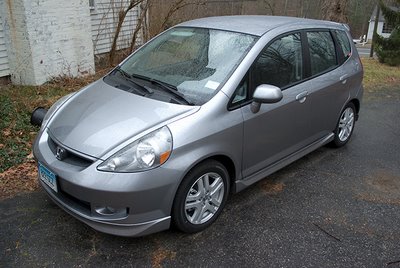 For years now I've been saying my wonderful 1989 Honda CRX would make it to 180,000 miles. It did, last week, and started coming apart at the seams. Mainly from being 17.5 years old rather than the miles. But it became hopeless and I had to get a new car. I lucked out and found a very hard-to-get Honda FIT (someone got tired of waiting and cancelled their order). It is a subject that might confuse an AF system if the sensor hits the plain metal instead of the wipers or other solid target.

Here is the problem. All AF lens/camera systems encounter situations—“focus problems” in the sense your math teachers used the word “problem”—that they can’t handle. Subjects with no detail or contrast, like the sky or the sky reflected in the paint on a shiny car, or a screen of winter shrubbery in front of a brick wall. In the first case an AF system can’t do anything at all, in the second, it can’t figure out whether you want the sticks or the wall, and depending on the distance, it may not be able to distinguish the sticks, period. In that case you get the wall, even if you wanted the sticks to be in best focus.

What I’ve found with the 21DA combined with the K10D camera—both quite new introductions—is that as long as the AF mechanism gets its act together the focus is correct. None of the back-focus/front-focus problems that afflict some samples of all lens/camera systems. When it’s right, it’s perfect, and that's with both samples of the lens on my camera.

What’s wrong is that simple focus problems throw the system for a loop. A six inch diameter tree trunk six or seven feet from the camera, placed squarely on the central focus spot, just isn’t seen by the AF system, which instead focuses well behind the target. Another problem, pointed out in an email from a reader who is working with the same equipment, is that at around 15 or 20 feet, the AF may miss the subject and jump not just to infinity, but actually past to the limit of the lens’s mechanical travel. I hadn’t found this before getting that email (thanks for the tip, Jim), but it did occur the next day when I used the K10D/21DA combination in very dim light. I’d like to test the lens on another compatible camera and I may do that soon, but I don’t have a different Pentax DSLR model handy at the moment.

Because I see the problems with both copies of the 21 and have reports of similar behavior from other peoples' camera/lens combinations, I don't think this is a sample defect issue. The 21 DA is too good a lens to give up on, so I’m continuing to use it, though playing it safe and using it only in manual focus. I’m neither a lens designer nor a software engineer, but my impression as a user of this gear is that what I’m seeing is a communication/compatibility issue that might be fixable, possibly even with a firmware update. I hope so. Maybe I’ll hear something about it from the elves in Golden, Colorado, as soon as they dig out from their second blizzard in less than a week.

Next time, we'll go on an Easter Egg hunt.

Question from ShadZee: Are you having issues with your other lenses? I'm considering buying the 43mm Limited (and maybe the 31mm limited as well). I really hope the K10 would work flawlessly with these two.

Carl Responds: My 40mm (and a 70mm pancake Pentax sent me for testing) both work exactly as the AF should. No front/back issues, focus locks on quick and secure with the same sorts of subjects that fool the system with the 21 mounted.
2:30 PM
Unknown