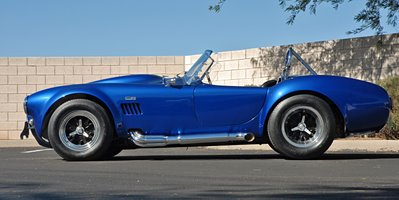 Click on any of the pictures to see larger
This is Carroll Shelby's personal 1966 Shelby Cobra supercharged 427 "Super Snake," that yesterday set an auction record for an American automobile, selling for US$5.5 million after a wild and fiercely competitive battle between two determined bidders at Barrett-Jackson's 2007 Scottsdale "Event" in Scottsdale, Arizona.

"It's a special car. It would do just over three seconds to sixty [mph], forty years ago," the 84-year-old Shelby said. "I killed a buzzard with it. Nasty, nasty."

The 800-horsepower car once had a twin, built for comedian Bill Cosby but wrecked by a subsequent owner. Shelby said he drove this one around for years. It was purchased by collector Ron Pratt of Chandler, AZ. 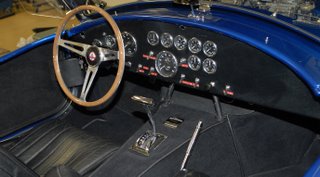 If you can't live without one of your own, Superformance builds modern Cobras (minus the coveted name) under license from Shelby—in keeping with tradition, sold sans engine; shoehorn in one of your choice. (Lots of nice pictures at the link, too, if you like that kind of thing.)