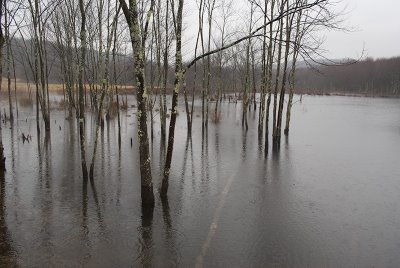 A weatherproof DSLR is nothing new to me after working with the Olympus E-1 for several years, but I'm so fond of rainy conditions that weatherproofing is basically a must-have feature for me now.

Today’s DSLR cameras and camera systems are so complex, I doubt anyone can spend the time to research everything about each of the systems they might choose. What I did when I first bought into the Olympus E-1 system three+ years ago, and again recently when I decided to augment my digital equipment with Pentax gear just a few weeks ago, was to examine specific, pivotal features, then make an executive decision. Life is too short (and I’d rather spend it out making pictures) to understand everything about every possible option on every available camera. But, once you’ve made your choice based on major issues that will affect the work you want to do, be sure to read the whole manual. It’s an easter egg hunt.

"Digital Preview" won’t be new to those who’ve been using Pentax digital cameras, but it was a nice easter egg for me to find. When I got my first good DSLR system, I thought the luminance histogram was simply wonderful. I bought the system to do pedestrian commercial illustration, where in the past I’d always used Polaroid tests to establish electronic flash lighting and so forth. Now I could make a shot, wait a couple seconds for card-write, then view a histogram (I couldn’t care less about chimping the picture—I know what the picture is—I only want to know whether the sensor has captured the tonal range correctly). This was fantastic. My only complaints were that I had to do several button pushes to get past the picture view to the histogram, and that the histogram was only luminance, not RGB.

Well, the K10D has a plethora of options for you to bring up when you hit the "arrow-symbol" button after the shot (does this symbol have a standard name? I don't know of one). One of them is a full set of R, G, and B histograms, plus the luminance one, along with a tiny thumbnail of the picture. Just what I wanted. 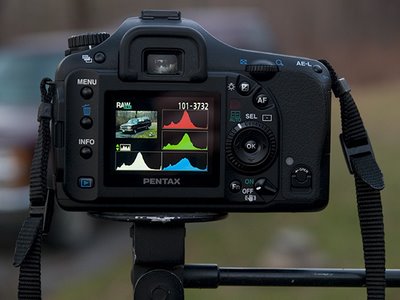 It’s an easy matter to make this the default (one-button) choice. The easter-egg part, Digital Preview, is that you can get all this information without wasting card space. The shutter release button on these Pentax cameras is surrounded by the On/Off wheel, which has a third, Masonic-Temple-looking symbol which I take to be an iris lens aperture. In default mode, if you move the dial there, it is what we old timers understand as the stop-down lever. It closes the lens to the aperture that would be used for shooting, so you can squint at the proposed depth-of-field. I never found this to be especially useful with old-fashioned film cameras, so it’s no surprise that I’m much more interested in the alternate function.

If you go into the menu options and start Customizing, you can make that lever do something quite different. Enable Digital Preview, and if you make that same move, the camera will pretend to take a picture, and send it straight to the LCD screen without recording anything to the memory card. This is great. You get, almost instantly, your preferred Info view (rgb+luminace histograms, with thumbnail, as I have it set). Without wasting card space, you’ve got all the data you could want about the scene.

If the color seems strange, you can hit the Fn button and then ask for White Balance, at which point the non-picture appears as background behind the icons for standard manual white balance settings.
  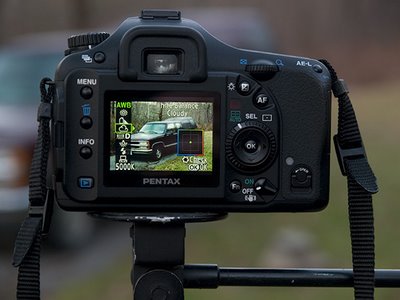 Click through them and find something that works better. Not good enough? Go in and fine tune the white balance. But realize that no back-of-the-camera LCD can really show color accurately, so this is only ballpark setting stuff. I always shoot RAW, but I still want the shooting white balance to be at least close. If your white balance is grossly wrong, your RGB histogram is also wrong, which is to say, worthless, which is why you want WB to be good even if you shoot RAW.

To be more specific, let's say auto white balance is much too blue (something that happens frequently with the K10D in overcast light). If the RGB histogram shows the red channel up near, but not at, the right edge (normally just what you want) when you correct the color temperature of the RAW file later, the red channel is likely to blow out. If the white balance is nearly perfect when you shoot, the red histogram would have shown that clipping and warned you to reduce exposure.

Of course, for anyone who really prefers to shoot JPEG this feature should be worth its weight in golden pixels.

OK, so what’s wrong with just shooting a test, then deleting it? My understanding is that there is a strong correlation between memory card failures and frequent use of in-camera deletion. I read about this before I began using a DSLR, and have never deleted anything in-camera. I have never had a card failure. Coincidence? How would I know? A friend who works for the nearest metro newspaper says “we don’t delete on the street” and that seems to get the point pretty well. I don’t care how much card giggage you can afford, but tests are useful, and you’ll probably do more tests if they don’t take up space on the card.