Home » »Unlabelled » Do Photography Websites Need to Grow Up?

Do Photography Websites Need to Grow Up?

TOP has been an online success story. Its popularity has grown and grown (although I'm aware that it's still a "little" site), and I actually derive income from it in about four different ways—not enough to live on, naturally, but enough to make me pay attention. It's gotten some very flattering press from around the internet, and enjoys many loyal adherents (you, that would be), for whose interest and support I'm grateful on an ongoing basis.

I have some doubts about photo websites in general, though. You may be aware that most of the professions—doctors, lawyers, accountants—went through a "sole practitioner" stage, maybe a hundred to a hundred and fifty years ago, very roughly speaking. Each professional, trained as a generalist, rented an office, hung out a shingle, and took in clients off the street. Every individual had to do everything that needed doing, on the practice side and on the business side. Gradually, this evolved into the paradigm of professional groups, where handfuls, dozens, or even hundreds of practitioners banded together—in hospitals or medical practices, or law or accounting firms. There were numerous advantages to such arrangements: specialists could be supported, clients could always be accomodated regardless of their differing needs, business specialists could be hired to handle those aspects of the practice, equipment could be shared, and overhead and shared costs could be spread out among many earners. There are still sole-practitioner doctors, lawyers, and accountants, of course, but for "power user" customers the new model has taken over. 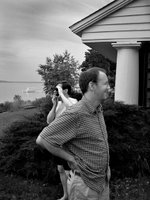 Professional photographers themselves have not really been able to move past the "sole practitioner" model simply because the product is so dependent on the one person's skills. If a client hires Joe Smith, they want Joe Smith to shoot their job—not some lackey from Joe Smith & Associates Inc. The business is dependent on Joe Smith's "eye," so to speak, and there's only one person who has that. This puts a stern limit on growth (as well as on other desirable things, like inheritability). Certain professional photographers periodically try to move on the "professional group" model, and a few have been able to beat the odds and make a success of that, but for the most part it hasn't become common.

My notion of photography websites is that we're still mostly in the age of the "sole practitioner"—the single, non-specialist jack-of-all-subjects who runs one little idiosyncratic website and remains king in his own kingdom. This suits the web, because viewers—who actually use things called "browsers," indicating what is ordinarily done with them—can flit about so easily from one place to the other, gathering tidbits from hither and yon.

And each "sole practitioner" eventually settles down wherever his or her own abilities and interests lead. So I go to Bythom for Nikon camera reviews, Luminous-Landscape for Canon camera and printer information, photo-i for printer and scanner reviews, photographyreview.com for user's equipment reviews, Steve's Digicams for digicam recommendations, dpreview for DSLR reviews, photoSIG or pbase to look at amateurs' pictures, the Digital Journalist for photojournalism content, a handful of my favorite blogs for entertainment, a couple of different industry sites for news, and so forth.

So far, it seems to me that only dpreview and imaging-resource (and perhaps to a lesser extent photo.net, which seems to keep trying but hasn't been very consistent about it) have made any real efforts to expand to become something more—that is, to expand past the sole practitioner stage. 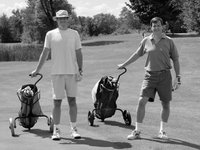 While there's nothing wrong with the status quo, necessarily, there are disadvantages to it. There's no editorial coherence past the boundaries of one site (and sometimes not even within certain sites); there's a whole heck of a lot of noise you have to wade through to get the information you want (especially on forums); and needs are addressed haphazardly—some well, some poorly, some in-between. For instance, there are a lot more digital camera sites than there are options for traditional photography news, and there is almost no place to go for news about major museum shows and exhibits.

And, of course, the biggie: atomization encourages fractiousness. Years ago I got hooted off the LUG (the Leica User Group) just because I wasn't willing to swear undying, unquestioning fealty to the automatic superiority of Leicas over everything else (my attitude of "it's just a camera" got me burned at a virtual stake, guilty of heresy). As we've seen in many places, dividing forums according to brands of equipment is just a bad idea. It encourages parochialism, divisiveness, bigotry, narrowness of viewpoint, and an overall shallowness to the discussions that may be convenient in a limited way but is ultimately counterproductive to encouraging an interest in photography as a whole, and deleterious to finding and encouraging a collegial commonality amongst participants.

The ideal answer, it seems to me, would be for photographic websites to take a lead from—hate to say it, but—porn sites. In what way? By requiring a monthly subscription fee for access.

Before your knee jerks up and hits you in the chin and you cry out, "I hate pay sites!", think about the raw potential for a sec.

If the right group of complementary content providers banded together, we could create a "supersite" so good that it would be a mandatory hangout for anyone interested in any kind of photography. If enough people got used to the idea of paying a few dollars a month for access to such a site, the income generated would be enough to compensate each content provider for the loss of the income and control we each now have on our little personal-kingdom sites. We could each concentrate on what we each do best; we could hire an ad salesperson, like any self-respecting magazine; we could have translators creating mirror versions of the site in different languages; we could have an editor correcting our English, and a software genius attending to the interface. And so on.

For the web-using photographer, the advantages could be substantial. Imagine a site which cost you, say, about as much a month as a fancy coffee in a really good coffee shop, but that offered you a choice of RSS topic feeds; a lead blog posting all the best, most interesting news from all around the site; a reliable source of pertinent up-to-the-minute information on everything from software updates, to industry news, to current museum shows; correspondents from around the globe; multiple-expert reviews of equipment; tutorials; columnists; articles on who's who; exhaustive, well-groomed links resources; a database of enthusiast book reviews; and original portfolios and photojournalistic stories, actually commissioned by the site and posted on it (I've always daydreamed of the return of LIFE magazine, something The Digital Journalist comes closest to providing now). Want me to go on? I could—but I'm sure you're already thinking up other possibilities yourself.

A sort of super-magazine. As I say, I think the site that's coming closest to such a model so far is Imaging-Resource, and they're certainly doing an impressive job, but it's only baby steps compared to what would be possible with real resources to work with, the kind of resources that could come from hundreds of thousands of subscribers from around the world all continuously committed to supporting the same site.

It may never happen. Maybe photo websites, like commercial photographers as opposed to doctors or accountants or lawyers, will stay mired in the sole practitioner stage indefinitely; it's possible that it's just the nature of this beast. But I wonder. Possibilities are always fun to think about.

Posted by: MIKE ("king in a tiny kingdom") JOHNSTON

Both photos are of my brothers, for no particular reason....
10:33 AM
Unknown