Michael Kenna at the Banbury Museum 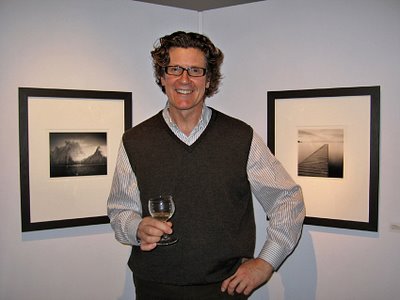 A number of black-and-white landscape photographers working today have a style that is characterized by gentleness and delicacy, coupled with minimalist compositions resolved within the square format. You’re also talking long exposures—sometimes up to several hours— taken either overnight or at the beginning or end of the day. The result can mean glass-flat seas and cotton-soft skies. Most of these photographers do what they do extremely well, and have rightly gained recognition for their work, but there’s one who stands head and shoulders above the others (not just because he’s immensely tall), and that’s because he pioneered this style. It’s Michael Kenna. And, until March 4th, 2007, people living within striking distance of Oxfordshire, in the U.K., have the all-too-rare opportunity of seeing a selection of his prints in person. There’s no better way of learning just why he's been so influential.

With the simple title, "Michael Kenna: A Retrospective," the exhibition comprises work that dates from the mid-1970s to the present day. Even his early photographs show strong indications of the signature style that was to develop so assuredly—not to mention the master printer he has become. A case in point is the quartet of pastoral scenes printed on the late, lamented Kodalith paper while Kenna was still a student at the London College of Printing some thirty years ago.

However, to my mind, it’s on seeing his most recent work from Hokkaido, Japan’s northernmost island—comprising such photographs as "Fifty Fences" against a snow-covered hillside, or "Sunflowers" (as you’ve probably never seen them before)—that you come to realize this is the place where Kenna and his camera were destined to end up. "I didn’t go there last winter, and I really missed it," he said at the exhibition’s private view on the evening of January 12th. That's why he is heading back there in early February—while the snow still lies thick on the ground—for a month.

When asked what he plans to do there, he replies, "Visit a few old friends—you know, trees…" and he laughs.

The Banbury exhibition has been produced in conjunction with HackelBury, the London gallery that represents Kenna’s work. Kate Stevens, director of HackelBury, says she hopes the exhibition will tour other U.K. venues, with a very definite aim: "He’s so well known in America, in Japan, in France and the rest of Europe, and yet few people recognize him in his own country."

There is a poignant coda to the timing and location of this exhibition. It was originally conceived in order to give Kenna’s elderly parents the opportunity to see his photography in a gallery near their home town. Sadly, they both died in the months before the exhibition opened.