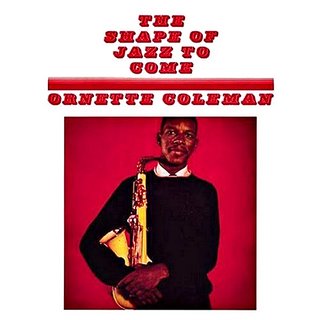 Ornette Coleman, The Shape of Jazz to Come

Atlantic, 1959
When this album came out the jazz world reverberated---almost as much as the red on the album cover does. It was a line in the sand; no turning back with your rejection or support. Trumpeter Roy Eldridge famously said, "I'd listened to him all kinds of ways. I listened to him high and I listened to him cold sober. I even played with him. I think he's jiving, baby."

And on top of the artistic drama, this album came out not as some standard fare black-and- white photo with utilitarian titles; it came out looking like this.

Start with the smiling, front-and-center-facing Ornette’s all-black outfit holding the stark shape of his plastic alto sax. In addition to the stark whitish object vibrantly punching through visually, the whole idea of adding to the insult of tradition by letting the world know he played a plastic sax was marketing magic.

Reminds me of when the B-52s put that ragged Mosrite guitar on the cover of their first album in the late 1970s.

The relationship between the red, black and white is a direct message of “Look out! You put this record on and you’ll hear these very colors in this group!” By namesake coincidence you do hear the colors—literally—the red cherry-rich background is pocket trumpet player Don Cherry, the black is Billy Higgins’ rich, deep, smoky rhythms and the white is the ghostly, more than likely junked-out Charlie Haden, a rail-thin white bassist from Missouri playing wildly punctuated lines.

, was known for shooting in Los Angeles jazz clubs with a 4x5 Speed Graphic. He saw shooting album covers as an opportunity to tap further into his love of jazz. On Claxton’s webpage, he reflects on his work from those days. “Photographing a jazz star in, say, 1955 for a record with a 12x12 LP format was a relatively simple and delightful experience. The cover concept would be discussed along with the artist’s wardrobe to be worn, the artist and I would meet at a suitable location and shoot the cover.”

When I worked in a used record store way back when, I’d occasionally see the older version of this album come in. The originals had heavy cardboard outer sleeves that had a layer of almost lacquered-on clear plastic. You’d hold it in your hands, the image would set-off against the strong white space and the font would hum in an almost electric way.

And the music inside---oh my. Some of my favorite listening moments have happened thanks to what’s inside this album. I am amazed that this music is almost 50 years old and remains completely contemporary. The playing demonstrates the hour upon hour of "woodshedding" it took to get to this level of interplay. You can trace the compositional style somewhat to blues forms that be-bop used, but with incredible twists within the genius of the melodies, in tandem with harmonic somersaults and wide-berth excursions taken in the mesmerizing solos. To me there is an amazing depth of understanding about how to advance tradition and fearless expansion upon the unspoken rules of jazz that were in place in the late 1950’s.

Do yourself a favor—get this. Play it and stare at it. Even if means squinting at a small CD cover.

You can read more of Bob's music review at our C60CD music site.
4:56 AM
Unknown