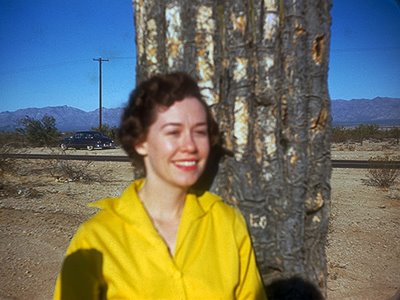 History has left the Mystery Woman a little fuzzy in more ways than one.
T.O.P. reader Stephen Edgar, from Ireland, recently encountered a mystery. He purchased a bag of old Kodachrome slides, and found to his surprise that most of them were pictures of the same attractive young woman, from more than fifty years ago. 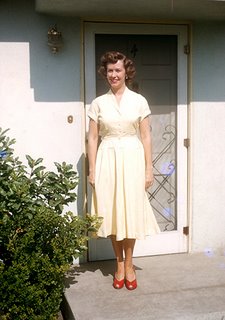 Who could she be, he wondered?

As many snapshots do, the old pictures do have a certain amateurish charm. "Like most Kodachromes they've stood the test of time with little fading," writes Stephen. "I've dated the slides to 1952, using the mounts as guides. I wonder if T.O.P. readers would fancy a little detective work to see if anyone (particularly U.S. viewers) could give me any clues as to where this person might have lived, who she might be, and what happened to her. And how did these pictures end up in Ireland?"

Indeed...it makes you wonder. A divorce, with the pictures discarded by the ex? Theft, or some other form of loss? Or just a old person's memories, unclaimed by heirs? It's probably unlikely that the subject of these old pictures will be identified, but it's an intriguing mystery nonetheless.

"There is little to go on," Stephen admits, "but maybe someone could see something I can't. If nothing else they are lovely pictures—and that's what photography is all about."