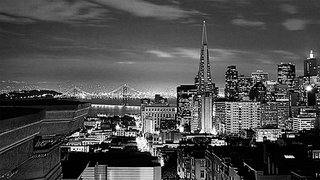 Chris Norris, San Francisco Skyline, one of the prints he's offering for charititable contributions
Chilly Dip: Reader Chris Norris (handle: thechrisproject) admits to us, in a roudabout way, that he's insane—specifically, that he will be jumping, "polar-bear" style, into Lake Monona in Madison, Wisconsin on the 17th of February in a charity event to benefit the Special Olympics. For those of you who may not realize it, February in Madison, Wisconsin is cold. As in cold. In a nice twist he came up with himself, Chris is offering fine prints of some of his photographs to people who make donations to sponsor his "chilly dip." Go to his website to take a look at some of the pictures he's offering. We'll get a hammer and chisel ready to free him from the giant cartoon block of ice he'll be encased in subsequent to the 17th.


They Pledge No Allegiance: Reader Asher Kelman writes to invite you to visit Open Photography Forums (OPF), started as an initiative for open discussion by some people who unreasonably got booted out and banned from certain popular fora a while back. A number of the exiles got together and formed a loose Open Photography Forums Initiative, from which OPF was born on May 19th, 2006. The community has a special character and helps everyone from expert pro to early user work towards great images. Best part? "We have no allegiance to any cameras," Asher says. "Everyone is courteous and pretty non-delusional about our own importance and that of the stuff we own." Power to them, we say.