How many people out there have bought a film-era SLR lens for their DSLR only to be vaguely disappointed in its performance—even if it's a prime (single-focal-length) lens?

1. Coatings are relatively more important to lens performance than most photographers realize.

What a lot of people don't realize is that when a lens says it's "multicoated," it doesn't mean that every air-to-glass surface in the entire lens is coated as well as it can possibly be. As with every other aspect of lens design, a lot of engineering expertise is invested in most lenses to try to figure out how to make the lens cheaper to manufacture, while still performing at a level that will be acceptable to the market. And applying separate layers of coatings to lens elements is expensive—especially if the lens is a zoom with 10 or 12 or 15 elements. Accordingly, lens designers specify which surfaces have to be multicoated, which can be single coated, and which can be left uncoated. And how many coatings are there in a "multi-"? Two? Six? Sixteen? (Do you know how many coatings the elements of Earth-surveillance satellite lenses get? I'll give you one clue: those lenses can cost half a million dollars and more.) The options available to the designer are more or less infinite. The chief limitation is cost.

The trouble comes from the fact that film lenses need to be protected from stray light in different ways than digital lenses. Not much light bounces back to the exit pupil of a lens from a piece of film. It turns out, however, that rather a lot of light bounces back from a digital sensor, and hits the lens where most lenses are least protected from flare—in the arse end. (That's a technical term.) How to cut corners in a lens intended for digital is a different engineering problem than how to cut corners in a lens designed for a film camera. Not a problem—except with DSLRs, which can accept both kinds of lenses.

This is the reason why you may be naggingly underwhelmed by the optical performance of, say, that older AF 28mm ƒ/2.8 you bought to use as a "normal" lens for your DSLR.

It's also the reason why you probably aren't dissatisfied with the performance of your newfangled, fancy-schmancy made-for-the-digital-age zoom (even the ones that also cover 35mm): it's coated to perform well on a DLSR. 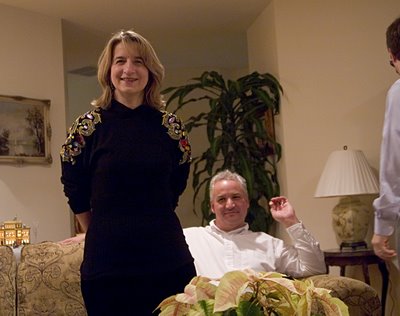 It's also the reason that film-camera lenses work better for digital if they were made to a higher standard in the first place. Sometimes, a maker's fastest, most expensive lenses work pretty well on DSLRs because they were aimed at pros when they were new. Because they were aimed at a more demanding market and intended for tougher conditions—and sold for more money—they were coated better than consumer lenses. A slower, cheaper lens—despite having fewer elements that would theoretically result in less flare—might not be so good. You don't hear people complaining about the performance of film-era Leica M lenses when they use them on their M8s, because one way to make a premium lens premium is to just not cut any corners. Film-era Leica lenses are already "coated for digital" just because they were well-coated, period.

I keep waiting for the lensmakers to start making new primes optimized for digital sensors—or at least to start making "Mark II" modified versions of their film lenses that are coated for digital. (Maybe they are. They don't tell me. Or you.) Unfortunately, the fact that they're not doing so does limit your lens choices a little more than might be immediately apparent from the catalog. For my DSLR, I'd rather have a lens that I know was coated specifically for digital.