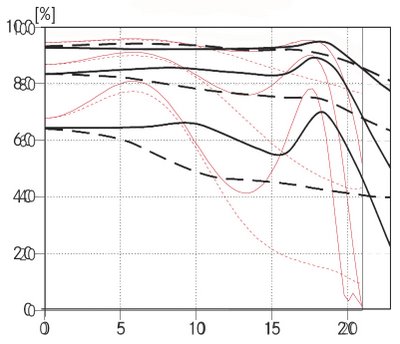 Following up on the "Careful What You Wish For" post below, this admittedly rather messy graphic is my attempt to superimpose the MTF charts of the new Zeiss ZF 35/2 (black) and that of the Leica R 35/2 (red), which has long been one of my favorite lenses. As usual, dotted lines are tangential, and solid, sagittal. I've erased the top pair of lines from the Leica chart, since it represents 5 cycles/mm and Zeiss tests only 10, 20, and 40. The sets that remain are equivalent.

This is something of a fool's errand, since measurements made in different labs with different equipment can't be taken to be perfectly accurate. Still, what the comparison indicates without too much doubt is that past an image height of about 10mm (the central 20mm of the image circle, that is), the new Zeiss lens handily outperforms its more than 30-year-old Leica rival.

In fact, as is also the case with the ZF 85mm ƒ/1.4 and the Leica Summilux-R 80mm ƒ/1.4, a comparison of the MTF charts indicates that this new Zeiss ZF lens outperforms its Leica counterpart. Not bad, considering how good both Leica lenses are. (Note that this is not a lens test; I'm just looking at the published charts.)