'Kay, I'm being kinda snarky again. (If you haven't noticed, "snarky" has replaced "curmudgeonly" as my favorite self-description. I don't even really know what it means, but it reminds me of a "Muttley snigger." I got that from Cotty.)

I have a suggestion for Canon in re the "big" 20D/30D/40D question. (You know, the one causing untold neverending shuddupshuddupSHUDDUP existential anguish all over every Canon forum on the 'net....)

The suggestion: drop it.

That's right. Drop it altogether. Why does Canon need a camera in between the XTi (400D) and the 5D, anyway? Answer: it doesn't. 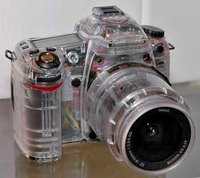 As fas as I'm concerned—just looking at Canon v. Nikon here, not considering outside contenders (which have much narrower slices of the pie chart anyway)—Nikon dominates the lower reaches of the DSLR market. The D40/D80/D200 trio provide the consumer with the best range of choices and the best cameras in each of their respective price ranges. True, the Canon XTi is a great little camera, for people down on that end of the market who prefer, for whatever reason, to shoot Canon. It falls between the D40 and the D80. Translation: you want cheaper than the XTi? Nikon's got it (the D40). You want better than the XTi? Nikon's got it (the D80). And the D200 is der Übercamera in its price segment. Why does Canon have to have a model to compete against the D200? So it can continue losing to it?

At the top end of the market, the situation is reversed. Up there, Canon is king. Its 5D/1D Mk.III/1Ds Mk.II lineup is the trio with the mostest*. Whatever you want at the top end, Canon's got it. No, it's not like Nikon doesn't exist up at that end: just as the XTi provides a worthy Canonophile alternative at the bottom of the market, the D2Xs provides a worthy Nikonophile contender to the 1D at the top end. Nothing against either of them: the XTi and the D2Xs are both real nice. But Canon's the one with the great range of choices, and the best cameras, on the high side of the DSLR breakdown. You want just as good a sensor as the D2Xs in a smaller, more easily portable, less expensive camera? Canon's got it. You want a pro workhoss that's just as fast 'n' beefy? Canon's got it. You want a much bigger sensor with significantly more pixels? Canon's got it. Game. Set. Match. 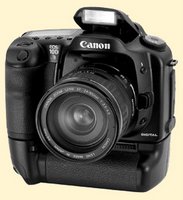 So my question for Canon shooters is, what the heck do you think you want in a "40D"? A better camera than the 30D? You've already got it, folks: it's called the XTi. A luscious, higher-MP, full-frame sensor and a great, big, beautiful finder in a tough, solid box? You've got that too: it's called the 5D. True, a lineup without a 30D creates a "price gap." Who cares? Either save your money, or spend less and stop kvetching about all the dough you didn't spend. If the XTi is too cheap to soil your soft pale fingers with, buy two.

And from Canon's perspective—well, all Canon needs to do is to work toward the middle. Give future iterations of the XTi a better viewfinder and more robust build, and/or work on bringing the price of the 5D down, or on putting the 5D sensor into a somewhat more modest camera.

So, Canon might need a 4D. Or a 3D (now that would be a cool camera name). But maybe it doesn't need a "40D" at all. It was a great series in its time; but maybe it's time now for the x0D series to go the way of the station wagon.

*If you can ignore the asinine naming protocols.
Transparent D80: digitalcameratracker.com
8:33 AM
Unknown