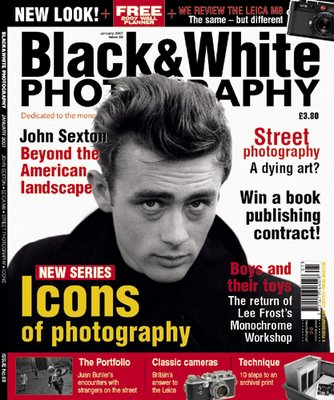 I just want to take a moment to recommend issue #68 of Black & White Photography magazine (January 2007). There's lots to recommend. It is, first of all, the first launch of a comprehensive redesign, which makes the magazine friendlier and less fussy. Regular readers of this blog know I'm a fan of Juan Buhler's Water Molotov, and in this issue I wrote an article about Juan's work. I must say that the elves did a fine job with the repro of Juan's portfolio; however often I've seen them on screen, it's really nice to see a few of them on paper. Juan's day job is in computer animation at Pixar; he's hard at work on Pixar's upcoming film. How he has the time and energy for such a stellar second career as a street photographer is beyond my humble ken.

My friend (and T.O.P. reader) John Sexton is represented in issue #68 with a nice portfolio and a solid article about his work and his new book, Recollections: Three Decades of Photographs

. If you don't know John's books, a Sexton book is always a treat, as John's good taste and superlative craftsmanship extend to reproduction quality and all the other aspects of fine bookmaking (and of course his beautiful photographs are always enjoyable). But I digress. Back in issue #68, Frances Schultz reviews the Leica M8, and Lee Frost returns in this issue. My own favorite feature in the magazine is "The Printers Art," in which two photographers are given the same negative to interpret. Alistair Baird and Trevor Crone do the honors time.

Black & White Photography is readily available in the U.K. In the U.S., check Barnes & Noble, which usually carries it. Subscriptions on this side of the Atlantic (and presumably elsewhere in the world) are pretty "dear," as our cousins say, but worth it. It's a nice magazine.

Posted by: MIKE JOHNSTON
5:01 AM
Unknown