Home » »Unlabelled » What Insurance Is For

What Insurance Is For 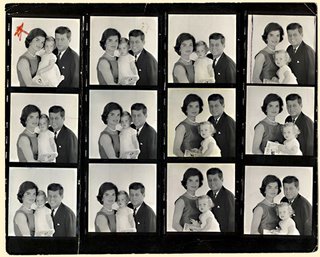 Jacques Lowe, John F. Kennedy, Jackie and Caroline
I recently redid my insurance, and it brought up some interesting points.

Not just about insuring cameras. I'm pretty familiar with the pitfalls of insuring cameras, and you are too, probably. Oddly enough, my old "hobbyist" cameras were insurable, but my latest DSLR wasn't. I use it for professional purposes, and I use it outside the home. The bottom line is, if you have any appreciable investment in cameras and photography equipment, you need a separate insurance policy for them.

I insured my books (which I have to inventory, though—is that going to get done?) and my CD collection, on which I put a replacement value of $10,000. That wouldn't replace what I have, but I figured if I had $10k to spend on CDs after a fire, I'd be satisfied.

The interesting thing that came up was related to the CDs: what about iTunes music? Presumably, my computer could perish in a fire, and it—the computer, and even the software I have on it—is covered. But what about my iTunes music, the value of which exceeds the value of my software by a considerable margin? My agent's assistant said, "I don't think that's covered." I translate that to mean, "If push came to shove, you're raw meat and we're an alligator."

And that brought to mind a further thought. Years ago, a photograph was legally held to be worth $1,500. (I don't know what the current law is, since I'm essentially out of the business.) Mostly, this covered cases of lost submissions to magazines and other clients, and I dimly remember it being a cause of periodic disputes, chiefly because it was either way too much or way too little. The thought was this: if my house went up in flames, what about the value of my pictures?

Much of the value of my negatives and digital picture files is personal, of course. And some of it is potential—or at least, so I hope. In the past three or four years I've essentially stopped shooting 35mm B&W, after 20 years of shooting that way, and one ambition I have is to collect the best of my 35mm B&W work into a book. If I were to lose all my negatives to disaster, obviously that book would never get made, and that would be a loss—to me. Of course I couldn't prove that the raw material for any such book has monetary value, even though it might have.

But, in point of fact, I do happen to have a few dozen negatives and picture files that have actually earned more than $1,500—a few have earned three or four times that. Would insurance cover those few "earners," or would they essentially be like iTunes music—valuable, but good luck getting reimbursed for them? This brings up so much "gray area" that it's positively murky. If a negative earned $1,500 in the past, does it have that much value, or has all its value already been realized? If one picture file earned $2,500, does another similar picture file have that much potential value? How would you prove that? No wonder the law assigns arbitrary values to pictures.

There are numerous examples in history of irreplaceable photographic archives being lost to disaster. Most of Carleton Watkins' archives were destroyed by the San Francisco earthquake, for example. The answer from an insurance standpoint would seem to be: if you want your pictures to be insured, take out a separate policy for them, assign a value to them, and pay the premium for it.

Even some archives which were given every chance to survive, haven't. Jacques Lowe, for example, was a talented shooter who was also President John F. Kennedy's official White House photographer. His archive—tens of thousands of irreplaceable, historically significant negatives—were carefully organized and stored under ideal conditions in a bank vault. The bank, unfortunately, was in the basement of the World Trade Center. No trace of any of it was ever found.