Home » »Unlabelled » Not the Same Shot, but the Same Action—? 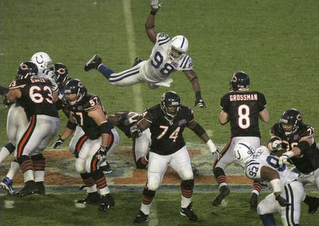 Photographer Sam Riche of The Indianapolis Star took a reverse-angle shot of what looks like the same moment [not so; see below] from the photos we were discussing in the post "Same Shot, or Not?" below.

Posted by: MIKE JOHNSTON, thanks to Jamie Owens

Featured Comment from Scott Strazzante, Chicago Tribune: Just to clarify, this play was a completely different play than the one mentioned earlier this week.

In fact, the Colts' Robert Mathis was sent flying by Bears' blocks on at least three or four occasions during the Super Bowl. Sam Riche was on the same side of the field as the rest of us upper position button-pushers. I don't believe there was a photo spot on the Indianapolis side of the field.

I do agree with some of the recent posters about the repetitive nature of photographs from major events like the Super Bowl. The challenge is to capture a unique moment while shooting shoulder to shoulder with the top shooters in the profession. I relish those opportunities to be different but still relevant. However, there are times when the only choice you have is to make a seemingly identical image.

Featured Comment by Josh Hawkins: The similarity of the Super Bowl images reminds me that one of the biggest issues for any photographer is keeping your work fresh and different.

I think the most interesting photographs are the ones away from what is meant to be photographed. Since we seem to picking on Scott Strazzante, let me call your attention to his Heart and Soul series,"An intimate look at high school athletics away from the fields of play." Some of it is great, some of it I'm not so impressed by, but I admire Scott for all of it—for trying to find more in sports than the game on the field. 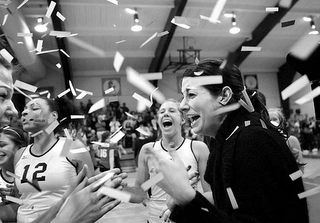