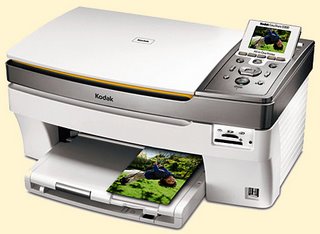 "For many years we've had stories about the ridiculously high price of inkjet printer ink. It is, according to some, one of the most expensive liquids around, costing more than vintage champagne. Someone once worked out that if you filled an Olympic-sized swimming pool with printer ink bought at retail, it would cost you $5.9 billion dollars (yes, with a b)....

"Kodak is supposedly announcing new photo printers today, with the explicit focus on the fact that their ink is a hell of a lot cheaper than anyone else's. In fact, they're also promoting that the ink cartridges hold a lot more ink, so you won't have to refill as often either. In other words, they're doing what any competitor in the space should do: beating the competition by offering what customers want...."

READ ON (with links) at Techdirt


Posted by: MIKE JOHNSTON with thanks to Kevin, and David E.

More about this from....

And this, the horrifying result of a behemoth corporation that's losing $600 million a year trying to be hip and fun (this is so pathetic it could slacken locked jaws):

Kodak's "Ink Is It" promotional site

(Thanks—or maybe that's the wrong word—to Richard S. for pointing this one out.)

I'm not sure I'm going to be able to forgive Kodak, Richard S. or TOP for leading me to that site. I am consistently amazed that 1) anyone who hears the pitch for movies/articles/ad campaigns as dumb as this one actually gives the green light to produce said movie/article/ad campaign; 2) once anyone has seen the final product, they still think it's a good idea to release it to the public.