Same Shot, or Not? 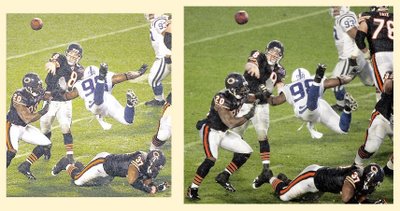 Getty Images shot by Eliot J. Schechter on the left
(poor repro because it was grabbed from a JPEG of the
L.A. Times' Sports Section front page);
Chicago Tribune shot by Scott Strazzante on the right.
Sharp-eyed pj Josh Hawkins alerted us to what he thought might be a case of mistaken attribution in this morning's "Best Super Bowl Photo" posting: "Check the Chi Trib's website," Josh wrote, "click on the main photo which will take you to their slide show. Image 15 [above right] looks to be the same photo by Scott Strazzante."

Nice catch by Josh. But if you compare the two pictures side-by-side, you can tell that although they were taken at very close to the same instant (look at Rex Grossman's hand)—possibly a case of two photo editors agreeing on the moment of peak action from two separate bursts of exposures—you can tell that they were taken from a slightly different angle. Look at #98's left leg against the 8 on his back; look at the position of Colts' #93 relative to #98's hand; look at the ball relative to the yard line in the background. Although the pictures would seem virtually indistinguishable if you saw them separately like Josh did, once you start to look at them side-by-side you can see a lot of slight differences.

Looks to us like evidence of something else: that Schechter and Strazzante were side-by-side too, or close to it, the latter to the former's left.

Posted by: MIKE JOHNSTON, with thanks to Josh Hawkins

Featured Comment by Curtis Clegg: Scott Strazzante has knack for being at the right place at the right time. Check out this comparison of photographs taken by him and John Gress of the same play of the Michigan-Notre Dame game at the same instant, but just a few feet apart. Oh, by the way, Scott has a cool blog about his experience photographing the Super Bowl for the Chicago Tribune. 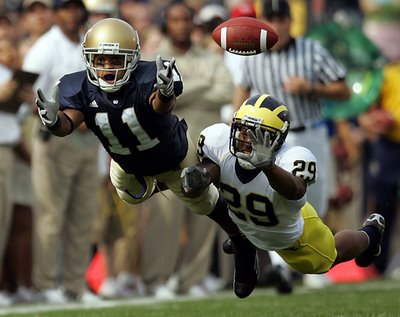 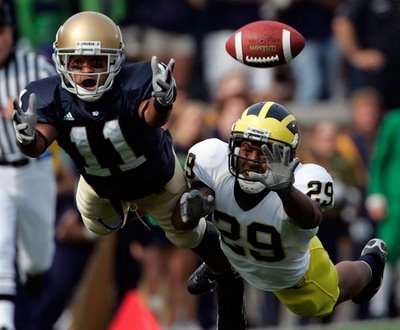