Chip Karma and the Computer Gods

Well, I certainly don't mean to provoke chip karma or the computer gods by saying this, but my transition to my new super-dooper computer went about as smoothly and easily as I can imagine. It's a little spooky how easy it is to upgrade Macs these days—the new computer simply becomes the old one, but with higher capabilities and lotsa software upgrades, and you don't have to do (or know!) anything at all. Just swap a few cables and wait.

That doesn't mean I wasn't worried about it beforehand, of course.

The only downside of the new computer is the monitor screen. The 20" size is nice, but LCD screens are just not as nice as CRT screens for photographs. The eMac's smaller monitor (the swan song of the deservedly famous 17" Apple Studio Monitor, I'm told) had higher image quality. On the good side, LCDs don't need calibrating every two weeks. Given everything that the new computer does better (not to mention how nice and quiet it is), I'll get used to it. 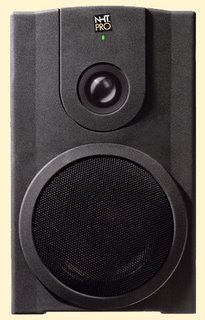 The first thing I did with the new computer was to try a bunch of things in Photoshop, Lightzone, and Acrobat. The new box cracks right along compared to the old one, and powers right through tasks that the old one choked on. I'm especially looking forward to doing more in Lightzone, which appears to operate transparently on the Core 2 Duo. The very first thing I did, however, was to upload a new book. I'm dying to tell the world all about it right this second, but I need to be patient and wait for the proof copy to get here before I make it public. That's supposed to take "10-15 days" plus shipping time. All in due course, as my father used to say.

Another upgrade question to throw to the Mob: does anybody own and use NHT M-00's? The "Moo," as it's known, is a high-quality powered loudspeaker (not insubstantially powered, either: 75 watts per side) that's optimized for nearfield listening (actually, it has a switch for nearfield or far-field positions). I find myself operating in a tethered rather than a standalone configuration most days, so most of my listening is done at the computer now. The Moo hits several of my hot buttons (it's sealed, and uses a paper woofer and a silk-dome tweeter, to name three). Just curious as to whether any of you are actually listening to these on a daily basis, and, if so, what you think.