After traveling all last week I've been playing catch-up and it took me until Wednesday to realize that Adobe posted the latest update to Adobe Camera RAW, version 3.7, on Sunday. ACR is the part of PhotoShop that interprets RAW digital capture files. ACR's controls for color and tone are so good that I seldom need to do anything to a digital capture file in Photoshop itself other than specific sharpening for intended use.

This update is important because the new version supports the Pentax K10D camera I bought a couple months ago (Nikon's new D40 is also supported). I've been using ACR version 3.6 right from the start for my K10D files, because Pentax offers the option of saving files in the "universal" DNG format instead of their proprietary PEF format. The reason I put universal in quotes is because even though ACR could open and work with the Pentax DNG files it was obvious that the protocols involved were not fully supported. The worst anomaly was in the vital White Balance function.

In ACR, White Balance is adjusted with two sliders. The first, Temperature, reads in degrees Kelvin, so a file captured in ordinary daylight should have a Temperature near 5000. Moving the slider to the right to a higher temperature makes the color warmer, moving to the left for a lower temperature makes it cooler. The second slider, labeled Tint, controls the magenta/green color axis and in normal light should read near zero. Moving to the right, into positive numbers, shifts the color to magenta, left to negative numbers shifts the color to green. (For example, a strong shift of +40 or so will correct for the green cast of fluorescent light.) But when ACR 3.6 read a K10D file, normal daylight files showed WB readings about 1800 degrees too high in Temperature and 60-70 points too high in Tint. These files looked perfectly OK on screen as long as the shooting white balance was correct, and they could be tweaked for color balance either visually or by sampling within the picture with the eyedropper, but the numerical readout was totally out of whack. It was still possible to process files out to printable .psd files and web-postable JPEG files, but the weird WB numbers were disconcerting and made me wonder what else about ACR's interpretation of the files might also be sub-optimal.

So I wasted no time downloading and installing ACR v. 3.7 yesterday. As soon as I turned Bridge loose on a big folder of captures it set to work making a new cache. Bridge is the browser element of Photoshop CS2, and it uses ACR to create thumbnails and previews of RAW files. When it finished the cache for a folder with about 900 captures I made last week on my trip, I highlighted a few files and hit 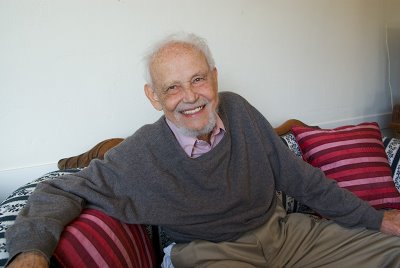 Carl Weese, Huston Smith
 
To end up back on topic, this was made with the K10D and 21mm DA "pancake" lens.