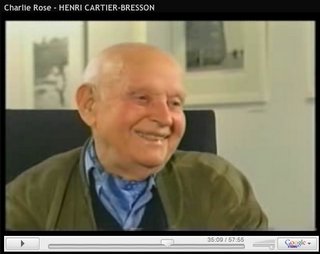 The Charlie Rose interview with Henri Cartier-Bresson has made its way online.

Cartier-Bresson interviews were always flawed, because no interviewer (that I've ever heard, anyway) was half savvy enough for Henri. Rose was particularly ham-handed, asking dumb and obvious questions that have a lot to do with what people believe about photography when they don't understand photography but think they do. He even speaks slowly to the old man, as if he were a child who can't understand. He brings up Cartier's obituary, which can't be a very tactful thing to do with a 90-plus year old man, and he makes dopey little errors throughout, as when he clarifies for the viewer that when Cartier refers to "Chim" he means "David Chim." (Chim's name was David Seymour). Cartier doesn't correct him. Sometimes Rose answers his own questions, for instance when he says, "You like portraits because...?" and then, before Cartier can answer, Rose says, "Every face is different." (Shut up.) Rose never puts his subject at ease, and Cartier-Bresson never warms to him (although he is visibly relieved as the interview nears its end). It's more than a little excruciating at times, almost embarrassing. 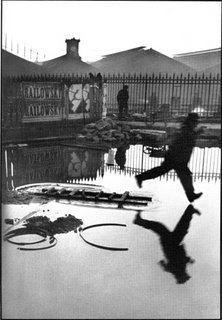 Still, the master is the master, and if you listen to M. Cartier-Bresson very carefully, all sorts of little gems flit by like sparrows past an open window. For instance, when he says "You mustn't want. You must be receptive." Throughout the interview I got the sense that Cartier-Bresson would have liked to raise bigger and deeper issues, but he just wasn't being led to them; he tried to wedge some of them in anyway.

This interview does contain one of my favorite "delicious ironies"—at one point (about 35:45 in this video) Cartier-Bresson says "I never crop"...and just beyond his right ear for the entire interview is the famous "Behind the Gare St. Lazare," which is one of two of his pictures that are always cropped (the negative contains a large bar of black all the way down the left side, and more foreground. The whole negative can be seen on p. 87 of Cartier-Bresson's new Thames & Hudson title, Scrapbook

All in all, not great, but valuable nonetheless.

Posted by: MIKE JOHNSTON, with thanks to Ken Tanaka
10:56 AM
Unknown