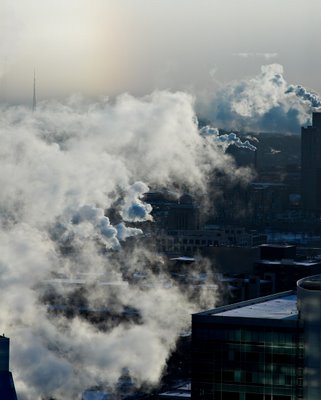 Morning Steam (Minneapolis on the morning of Feb. 4)
Photo by Hoainam Tran (a.k.a. charcoal heather)
When I woke up at 5:30 this morning, the thermometer on the side of the house read an impressive –28°C (that's –18°F). One thing that occurred to me was that I could grab the camera and head out and see how long it would keep taking pictures before something in it got too cold and it stopped working. But then I really weighed the two competing alternatives—on one hand, warm office, hot coffee, sheepskin slippers, dog curled at my feet; frigid arctic air, swirling wind, boots, hat, gloves, and parka and a frozen camera on the other.

I must be getting old, but I decided I wasn't that curious. Besides, it's not even 8 a.m. yet, and the outdoor temperature has already warmed up to –25°C.

Featured Comment by hydropneumatic: Where I live, in northern Sweden, it's often below –25°C. Since those super cold days usually bring fantastic light and wonderful landscapes, I often bring my KM5D out for long shoots. The camera works just fine, but some lenses won't do AF reliably after a while. Probably an issue of stiffened grease or barrel contraction, but MF is no problem. Also, battery life is abysmal at those temperatures.

One thing to think about, for those of us without sealed cameras, is that moisture condensation can cause quite a mess once you get indoors. I solve it by putting the gear inside a plastic bag (while still outdoors) and carefully sealing it before going indoors. Once the camera is warmed up to room temperature, it is safe to open the bag.
5:56 AM
Unknown