Home » »Unlabelled » The Second-Worst Photographic Mistake I Ever Made

The Second-Worst Photographic Mistake I Ever Made 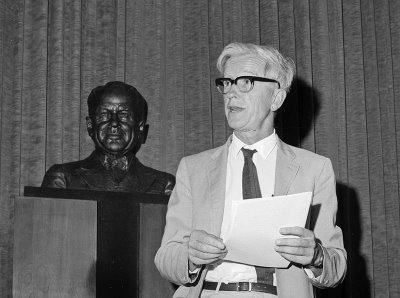 Max Delbruck. A perfectly serviceable news photo, but nothing to build a career on. Not like the one that got away.
By Ctein

When I was an undergraduate at Caltech, late '60s, Max Delbruck won the Nobel prize. By tradition, the student newspaper turns out a same-day special edition when the school racks up another Nobel. So at the ungodly hour of 9 a.m., I'm front row center, photographing Delbruck's press conference.

I make 35 nice, clear photographs (Panatomic-X plus one of those old potato masher flashes with enough watt-seconds to light the moon, and lethal voltage levels). Then I sit back: "be-prepared" photography says don't use that last frame of film. It's for that once-in-a-lifetime photo. Christ might decide to make a Second Coming at the press conference, and wouldn't you hate to be out of film?

This time it paid off, big-time. The conference ended, the other reporters filed out. I was a couple of meters from Delbruck. Dick Feynman (the previous Nobel Prize winner at Caltech) strides up wearing a big grin and reaches out to embrace Delbruck. Delbruck reciprocates. With no other photographers around, I'm perfectly positioned, perpendicular to them, close enough to get a great full-frame photograph, and my flash is charged.

I estimate the rate of approach and the shutter lag perfectly when I press the button. When the strobe fires (always keep both eyes open so that you can see what's photographed) they haven't quite embraced; there's a gap of six inches or so. Their heads are almost nose-to-nose but don't overlap, so you can see both of their happy, smiling profiles clearly, with their arms closing around each other. It's a classic decisive-moment photo.

Exposure, focus, composition, it's all there—the kind of photograph that starts a career. Not only can I syndicate this for some decent bucks, it goes at the front of my portfolio when I go for a job with one of the big weekly magazines. No one photo's a ticket into a career, but this is as good as it gets.

I'm so excited that I decide I need backup insurance. As they pull apart I rapidly wind the film to make another photograph, and ...

You just know exactly where the film ripped, don't you? Oh God, just what part of "one spare frame" didn't I understand?!

If this had happened 15 years later, I'd have developed the torn-off piece of film and paid mucho dinero to get torn-in-two Frame 36 scanned and digitally reassembled. But in the late 1960s, this wasn't even a glimmer in anyone's eye.

The moral? Even for a hot-shot physics major, 1 + 1 it is still going to be greater than 1.